Fibromyalgia is a chronic condition of widespread pain and profound fatigue. The pain tends to be felt as diffuse aching or burning often described as head to toe. The fatigue ranges from feeling tired to the exhaustion of flu like illness.1The name fibromyalgia is a combination of three terms-fibrofrom latinwhich is fibrous tissue such as tendons and ligament, greek prefix myo indicating muscles and algiafrom greekindicating of pain.2It is known as syndrome because it is a collection of symptoms rather than a specific disease process that is well understood.
The definition of fibromyalgia syndrome (FMS) as stated by the American College of Rheumatology (ACR 1990)3 is as follows:
1. A history of widespread pain for at least 3 months.
Pain is considered widespread when all of the following are present: pain in the left side of the body, the right side of the body, below the waist and above the waist. In addition there should be axial pain (cervical spine or anterior chest or thoracic spine or low back). 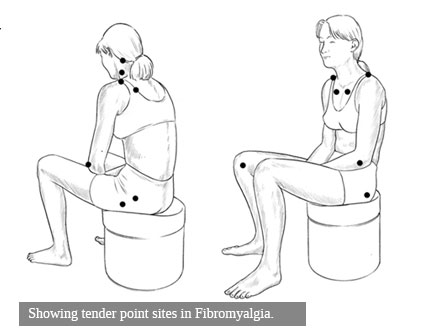 2. Pain (with the patient reporting ‘pain’ and not just ‘tenderness’) in 11 of 18 tender point sites.
The sites are all bilateral and are situated: 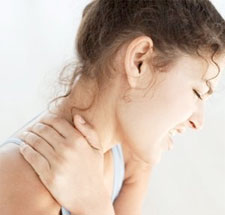 Fibromyalgiahave been reported for hundreds of years, under many names, including the most unsatisfactory term ‘fibrositis’. It was also coined the term muscular rheumatism which became popular. In 1987, the American Medical Association recognized fibromyalgia as a distinct syndrome (Starlanyl& Copeland 1996), although at that time detailed knowledge of what the syndrome comprised was not as clear.

In early 1904, a study carried out by William Gowers coined the word fibrositisbelieving erroneously that inflammation was a key feature of ‘muscular rheumatism’. Ralph Stockman (1904) offered support for Gowers’s suggestion by reporting finding evidence of inflammation in connective tissue in such cases and suggested that pain sensations emanating from nodules could be due to nerve pressure.This term was not changed to fibromyalgia until 1976.

In 1912 a German physician A. Muller made a break-through in the field of Fibromyalgia. He noted that there are nodules and taut bands and in order to identify them required refined palpation skills which he suggested, by lubricating the skin.

Smythe laid the foundation of modern FMS in 1972 by describing widespread pain and tender points. M. Yunus, A. Masi, et al 1981first popularized the word fibromyalgia. Janet Travell, David Simons (1983) diddefinitive work on the subject of myofascial pain syndrome (MPS). 1990 R. Bennett reported that many ‘tender points’ in fibromyalgia are in reality latent trigger points. He believes that MPS and FMS are distinctive syndromes but are ‘closely related’states that many people with MPS progress to develop fibromyalgia. 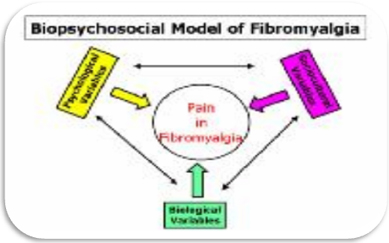 The etiology of fibromyalgia is multifactorial and includes both environmental and genetic factors. Engel's biopsychosocial model of chronic illness (ie, health status and outcomes in chronic illness are influenced by the interaction of biologic, psychological, and sociologic factors) provides a useful way to conceptualize fibromyalgia.

FMS has a genetic predisposition. The extremely important genetic contribution to fibromyalgia and related central sensitivity syndromes was first suggested by family studies. First degree relatives of individuals with FMS display an eightfold greater risk of developing fibromyalgia than those in the general population.

Sex-related effects are important in fibromyalgia and with pain in general.Central pain modulatory systems in females are influenced by phasic alterations in reproductive hormone levels. Aversive stimuli and stressful tasks are more likely to evoke SNS, HPA axis, and psychological responses in females than in males.

Almost all patients with fibromyalgia sleep poorly, hence, the common report that a night of poor sleep is followed by a more painful day. Intrusion of alpha waves into slow delta wave stage III/IV (deep) sleep was the first objective abnormality observed in fibromyalgia.Although not the proximate cause of fibromyalgia, abnormal sleep affects both limbs of the stress response system and contributes to negative mood and cognitive difficulties.

A large body of data suggests that fibromyalgia, chronic fatigue syndrome, regional chronic pain syndromes, and certain emotional disorders that frequently coexist with fibromyalgia all involve central dysregulation of the stress response system.In these disorders, various forms of stress function as initiators of functional alterations in the corticotropin-releasing hormone (CRH) neuron. The extremely high prevalence of stress-related disorders in society may reflect maladaptation of the stress response system in the face of the almost universal stress and consequent distress that characterizes modern life.

Age is a variable; most cases occur between the ages of 20 and 50 years. Physical deconditioning is also a variable. Variables with an uncertain relationship to the development of fibromyalgia include the following: 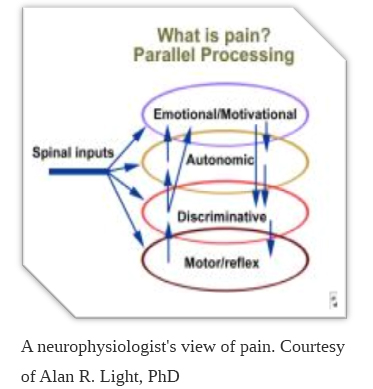 In additional to neurobiological mechanisms, behavioral and psychological factors have important role in symptoms expression and more notably in the functional decline of many patients with fibromyalgia. Pain and other symptoms of fibromyalgia might cause individuals to function less well in the various aspects of their lives. There is cessation of pleasure activities and reduction of exercise

Once a susceptible individual has symptoms of fibromyalgia, the most consistently detected objective anomalies involve the pain and sensory processing systems.
Studies have demonstrated that FMS patients cannot detect electrical, pressure or thermal stimuli at lower levels than normal. The increased tenderness in fibromyalgia is not confined to tender points but through-out the entire body.
Neurophysiologically, the pain experience derives from a complex sensation-perception interaction involving the simultaneous parallel processing of nociceptive input from the spinal cord to multiple regions of the brain.

A number of abnormalities in pain processing have been demonstrated in fibromyalgia. Among them are the following:

Environmental and sociocultural variables include the following:

To confirm the diagnosis the concomitant systemic diseases should be ruled out and common coexisting conditions should berecognized.
Time rule
According to American College of Rheumatology criteria there should be chronic widespread of pain for at least 3 months on a more or less continue basis.3
Sign and symptoms
Pain should be present at multiple fibromyalgia tender points when pressure (approximately 4 kg/cm2) is applied manually, with pressure increasing gradually at the rate of 1 kg per second over 4 seconds, as depicted in the image below. The pressure should cause no referred pain.5
Besides pain and fatigue fibromyalgia symptom often include:

Numerous instruments have been used in clinical trials of fibromyalgia syndrome. Pain - Vastly used and validated methods are

A useful device for rough quantitation of pain perception and pain tolerance is a pressure algometer, or dolorimeter. Pressure algometry (dolorimetry) provides a simple determination of pressure pain thresholds at 4 tender points associated with fibromyalgia (ie, both lateral epicondyles, midpoints of the trapezii). Normal values are 4 kg/cm2 or greater.
Pressure algometry can also serve as a useful tool for educating the patient regarding the nature of altered central nociceptive processing, allodynia (pain with stimuli that should not cause pain, such as gentle touching) and hyperalgesia (amplification of pain experienced from peripheral stimuli that are expected to be painful). On follow-up visits, it can provide a semiquantitative guide to therapy

Fatigue is a common feature of FMS. The commonest unidimentional instruments used are Functional Assessment of Chronic Illness Therapy- Fatigue Scale and Fatigue Severity Scale.
Sleep : Non refreshed sleep is common and the thought to be an important pathological feature.

Patients with fibromyalgia do not have characteristic or consistent abnormalities on laboratory testing. However, routine laboratory and imaging studies are important to help rule out diseases with similar manifestations and to assist in diagnosis of certain inflammatory diseases that frequently coexist with fibromyalgia. In addition to complete blood cell (CBC) count and differential count, basic metabolic panel, and urinalysis, the following limited evaluation is reasonable. 5-6

Many rheumatologist recognize 2 types of fibromyalgia6

Primary fibromyalgia is the most universally accepted form of fibromyalgia and is normal diagnosed when no underlying causes are present (such as arthritis, lupus etc) and at least 11 of 18 designated points are confirmed. The cause of primary fibromyalgia syndrome is unknown but it can be induced by trauma, infection, stress, inflammation or their factors.

1. Pain
The chief complaint in patients with fibromyalgia is often pain.The quality of this constant pain is described as burning, aching, and soreness. They is feeling of bruised all over, even though there are no physical signs of this.
The pain radiates diffusely from the axial skeleton over large areas of the body, predominantly involving muscles and musculoskeletal junctions, but also in joints (arthralgia without actual synovitis).5
Regional pains in fibromyalgia may include

Patients may experience flare-ups, with an acute, intense increase in symptoms that last more than a day. The pain may reach such intense levels that the patient becomes bedridden. Flares-ups usually are triggered by a stressor, such as infection, trauma, or changes in medication, sleep, or exercise. Onset of allergies, changes in diet, and a change in usual activity may bring on a flare-up.

2. Tender point and tenderness: hyperalgesia and allodynia
The presence of multiple hyperalgesic tender points is a typical finding in FMS. Patients with FMS have reduced pressure pain threshold, experiencing pain with normal innocuous pressure: Allodynia. When noxious stimulus or pressure is applied, FMS patient experience more severe pain than normal individuals. This is known as Hyperalgesia.

3. Sleep
Patients generally do not volunteer a history of a sleeping disorder, but a carefully taken history reveals unrefreshing sleep in about 65% of patients and morning fatigue in about 80%. Patients awaken as tired as they were before sleeping. Most patients awaken frequently throughout the night, and some have difficulty falling asleep. They finally fall asleep in the early morning hours, describing this as their best sleep.

4. Fatigue
Many patients with fibromyalgia report that fatigue is second only to pain as a source of distress. The fatigue is worse in the morning and early evening. By 10 or 11 o'clock in the morning, the fatigue subsides somewhat.

5. Cognitive problems
Cognitive problems (known as "fibrofog") may be a primary symptom of fibromyalgia.Cognitive symptoms associated with fibromyalgia are exacerbated by pain, mood and anxiety disorders, and poor sleep. Cognitive symptoms include confusion and forgetfulness, an inability to concentrate and recall simple words and numbers, and the transposition of words and numbers. Cognitive functions are often so impaired that patients cannot perform the activities of daily living (ADL); they may become lost in familiar places or lose the ability to communicate effectively. Patients who work may fear losing their job, and many pediatric patients drop out of school because of their inability to complete their schoolwork.